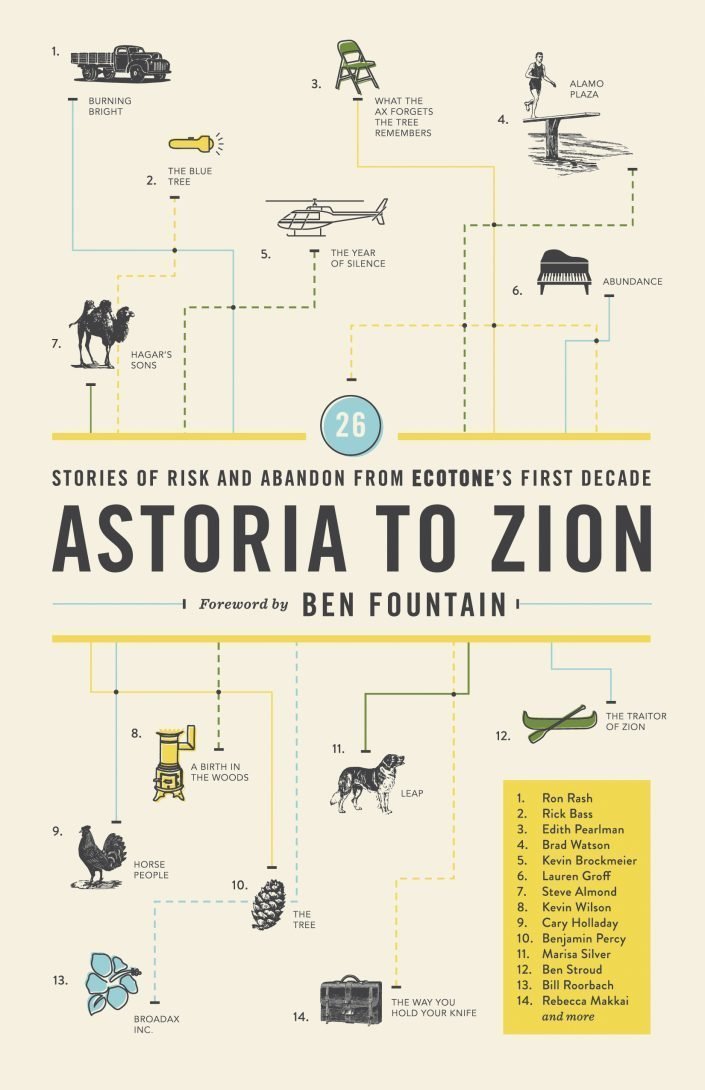 Astoria to Zion: Twenty-Six Stories of Risk and Abandon from Ecotone’s First Decade

This collection makes a permanent home for the vital stories of Ecotone contributors Steve Almond, Rick Bass, Lauren Groff, Rebecca Makkai, Edith Pearlman, and Ron Rash, among others. In keeping with the magazine’s mission to reimagine place, the collection explores transitional zones, spaces where we’re most threatened and alive.

In his introduction to The Best American Short Stories 2008, Salman Rushdie called Ecotone one of a handful of journals on which “the health of the American short story depends.” Now at the close of an award-winning first decade, the magazine has established itself as a preeminent venue for original short fiction from both recognized and emerging writers, with more than twenty stories from sixteen issues reprinted or noted in the Best American, New Stories from the South, Pushcart, and PEN/O. Henry series.

With the publication of this anthology, Lookout Books makes a permanent home for the vital work of Ecotone regular contributors Steve Almond, Rick Bass, Edith Pearlman, Ron Rash, Bill Roorbach, and Brad Watson, along with rising talents Lauren Groff, Ben Stroud, and Kevin Wilson, among others. In keeping with the magazine’s mission to reimagine place, the collection explores transitional zones, the spaces where we are most threatened and alive. From a city fallen silent to a doomed nineteenth-century ship, from a startling birth in the woods to the bog burial of an adored archaeologist, from the loop of hair in a drowned trader’s locket to the sanctity of pointy boots in a war zone, these stories make beautiful noise of our most fundamental human longings.

“A superb anthology that showcases short fiction by emerging and established writers. Twenty-six tales tightrope between defined and amorphous states, while characters go to extremes to test their agendas and circumstances both ordinary and bizarre . . . The breadth of the selected tales creates a satisfying and often enthralling collection that perfectly celebrates Ecotone’s first decade.”

“These stories care deeply about the physical world—sea, fire, city, countryside—but their concerns also press into every corner of existence—politics, love, regret, ambition. Heirs to Whitman, the collective voices are beautiful, soulful, crushing, and intelligent.”

“Astoria to Zion is a dazzling literary showcase of veterans and new voices, which offers all that readers have come to expect from Ecotone. While conjuring and exploring wildly varied places, this collection stakes out a stellar one of its own.”

Author of Life After Life

Ben Fountain was born in Chapel Hill and grew up in the tobacco country of eastern North Carolina. A former practicing attorney, he is the author of Brief Encounters with Che Guevara, which won the PEN/Hemingway Award and the Barnes & Noble Discover Award for Fiction, and the novel Billy Lynn’s Long Halftime Walk, winner of the National Book Critics Circle Award and a finalist for the National Book Award. His book of essays, Beautiful Country Burn Again: Democracy, Rebellion, and Revolution, is based on his award-winning reportage for The Guardian on the 2016 U.S. presidential election.